This is not reporting . i wanna asking ( can you kill Marshall crew by KAtiba? ) so i try too Next

good question, its difficult to tell

Generally Marshall is a super weak APC, in fact you can shoot out the Commander and Gunner with 1 12.7mm APDS round from the lynx when the Marshall is full health.

Now comes the Arma game mechanics part:
With the Introduction of the new HEAT sytsem and the new Armor system for tanks, the Hull has become a damage reduction layer. So any Damage goind through will be lowered by the Hull depending on its status.
As seen in the last second of the video your hull is orange, probably towards red, what very likely could have lowered the already low damage reduction to a point where a "bigger" rifle can penetrate it to deal damage.

Either that or there is a glitch in the damage model somewhere, but thats difficult to say and would need a fix by BI
My Steam Profile

Did some testing. Marshall was in full condition.

With katiba could not hit crew from behind or sides. At front I could hit driver and killing him (needed multiple shots), shooting through that little window (in pic red square). 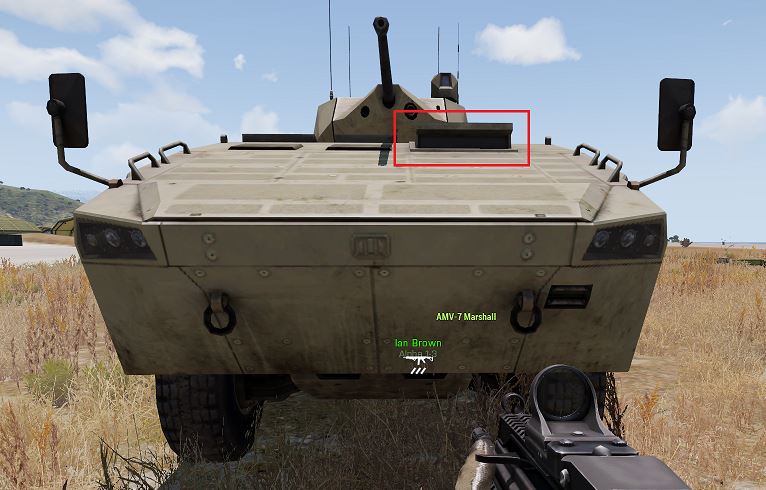 On sides I tried Mk18 7.62mm and could hit (probably) gunner and/or commander. So even 7.62mm will go through on some parts of vehicle.

But in your case if I saw it correctly enemy was shooting from behind, so probably that badly damaged vehicle did not gave enough protection anymore as Blubb said. Good to know.
Top

thank you guys for the info . appreciate that see ya in battlefiled
Top
Post Reply
5 posts • Page 1 of 1

Users browsing this forum: No registered users and 10 guests